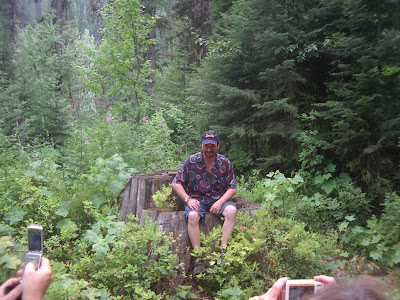 In the summer of 2007, some of my Norwegian relatives came to visit my family in eastern Washington and northern Idaho. Among the various and sundry activities, we took them over to the Loop Creek area near Wallace and Avery. My grandfather and his father had several mining claims in that area, including a patented mining claim. At any rate, the picture above shows Olav sitting on a very large, old tree stump that is near an old cabin that still stands just off Loop Creek, near Kelly Creek. The cabin is known as "T-Bone's Cabin," because a guy named "T-Bone" lived in it for many, many years. He had a mine nearby. He was one of my grandpa's friends. T-Bone inherited the cabin from a hooker. Yes, a hooker. That was back in the day when Adair and several other small towns existed along the old Milwaukee line that is now known as the Hiawatha bike trail. With respect to the stump, it was T-Bone's toilet. At one time, he had a shower curtain around it. I am totally serious. We had Olav sit on it to demonstrate the creativity of the northern Idaho toilet.
Posted by Thorpe Orton at 8:41 AM

Nipped over from Dingleberries....

I love this photo and the little story that goes with it :) 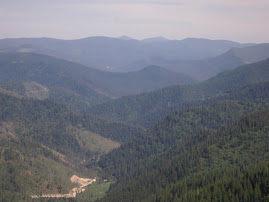 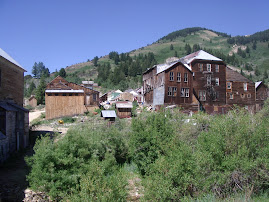